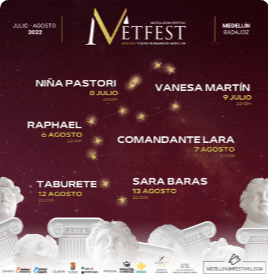 The Metellinum Festival (or MetFest) kicks off this weekend in Medellín (Spain) with Niña Pastori‘s concert, and los amigos digitales have been managing its digital advertising campaigns for months.

We have been working with Emotional Events, organizers of the festival, for quite some time now, and we have had the opportunity to launch these campaigns in different phases, as well as on different platforms.

For this, the management offices of the participating artists have been very kind too, allowing us to target these campaigns on social networks to the followers and look-alike audiences of these artists.

Specifically, we must thank the following management offices: MOW Management in the case of Niña Pastori, RLM for Vanesa Martín, Raphael and Sara Baras; Ninona Producciones for Comandante Lara and Vespok 360º for Taburete.

As well as the artists’ offices: Raphael’s own one, and Rmedios Marketing for Sara Baras.

Giglon is the platform that takes care of the festival tickets sales, and we have been able to work with pixels with them, so that we have had information about tickets sales, being able to make well-informed decisions in the campaigns (as well as verify their effectiveness)

The first phases took place in April, to reach the artists’s fans in Spain, so that they were aware that their idols were going to be live in a unique environment such as the Roman Theater in Medellín (very near Mérida and Badajoz, in Extremadura), and with a very small capacity (only 1,200 seats). That is to say, that they had the possibility of organizing a very good plan for a summer weekend!

Later, and in some cases, we launched special campaigns around Mother’s Day (in May)

Subsequently, and closer to the celebration date, we have once again insisted on specific campaigns around each of the artists.

We have combined all of this with joint Display campaigns on the Google network, limited to “premium” placements, and also opened up to the entire network (allowing the platform to find the audience in mobile apps, YouTube channels, websites…)

Finally, we have launched another joint campaign using the Carousel format on Facebook, as well as a Search (or SEM) campaign on Google, with very good results in both cases.

There are fewer and fewer tickets available, as well as the time left to enjoy these concerts. Take a look to the festival’s official website, and get your tickets… See you this summer at the Roman Theater in Medellín, enjoying the best artists under the stars!