We help Nieve Sandía with the launch of their new single 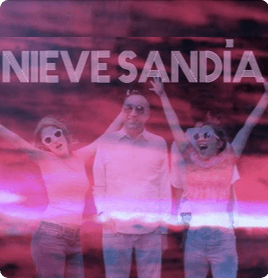 Nieve Sandía is the alternative pop project created in 2018 by Madrid-born singer and songwriter Javier Cuenca. In 2019 he released his first self-titled album, a five-song EP published by the independent label Malvadas Ardillas and produced by Carlos René, responsible for works with Capitán Sunrise, Axolotes Mexicanos or La Bien Querida.

After the pandemic, in November 2021 he released a new single, “1967”, produced on this occasion by Fernando Moreira.

And “Pista de hielo” is his new single, recently released, and for whose launch he has counted on los amigos digitales.

Thus, we have been advising on the digital strategy, helping to improve the presence on platforms, with “pitching”, with digital advertising campaigns supporting the launch of the single and the lyric video on YouTube…

“Pista de hielo” is a simple pop song built according to the classic structure of verse and chorus, which is supported by a direct melody and equally accessible lyrics where feelings are talked about using different scenarios and sensations.

The song has been produced, recorded, mixed and mastered by Fernando Moreira, who is also in charge of electric guitars and bass. “Pista de hielo” is completed with the composition and the voices of Javier Cuenca, the keyboards of Carolina Loureiro and the drums of Reto Ramírez.

The lyric video has been created by Andrew Maclaurin, from digitalmente.es

Listen to the song and watch the video clicking here or on the cover below, and keep an eye to Nieve Sandía!