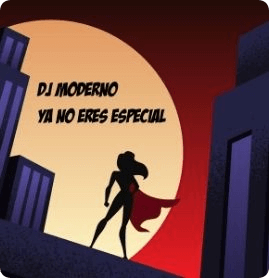 It is “Ya no eres especial” (translated “You are no longer special”), it will be launched this Friday, December 11th, and los amigos digitales have been advising the popular Spanish Dj and producer on the digital aspects.

Thus, we have designed together with him a content strategy, in which different materials related to the single have been revealed through his profiles on social networks, including -for example- a playlist created by the artist on Spotify with the songs that influenced the single, along with a video posted on his YouTube channel explaining why. Listen to the playlist here, and watch the video here.

All this strategy culminates this Friday 11th, when, in addition to launching the single on all platforms, the videoclip will be released at 11:00AM on his YouTube channel, and at 11:00PM the artist himself will present it in an exclusive session online through the DigitalFEP.com platform.

His followers can get their tickets for this session, even in an exclusive pack including the ticket and a t-shirt with the design of the single. Take a look at the different options here.

los amigos digitales have been advising on all the previous actions to ensure that the result is the best possible.

Likewise, on February 11th we will take care of the digital campaigns on Facebook, Instagram and YouTube that will support the launch of the single on all streaming platforms, and the clip on the well-known video destination.

“You are no longer special”!

Dj Moderno is not new in the national indie scene. He has been publishing remixes of national and international indie bands for years, as well as performing and publishing material with the different bands where he has played and militates as a musician (Horthy, Igeldo, Amyjo Doh & The Spangles), in addition to putting the soundtrack to the indie night of numerous clubs and festivals in Spain.

His career as a sound designer and composer of soundtracks is also extensive.

However, it has been this 2020 that has led the artist to start producing material and publishing it under his own name: Dj Moderno.

He has published two singles in October and November 2020 respectively under the names “Sigo Aqui Sentado” and “Virus Mutante”. And after an excellent reception of his first two somewhat reflective and intimate singles, he now presents this third work much more danceable and cheerful.

In this song, published by the FEP Producciones label, the dj and producer moves between melodies of a marked pop orientation that are more affordable or easier than in previous releases and electronic bases of danceable nu-disco recalling bands like Caribou, Felix Da House Cat or Crooked Colors.