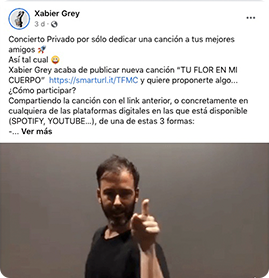 los amigos digitales work with the artist Xabier Grey in his new single (“Tu flor en mi cuerpo”) launch. The song is an advance of his next EP, from which two more singles has been released to date.

The single was released last Friday (August 28th), and we have collaborated in the design of the promotional action launched by Xabier Grey in his networks. There, he invites his followers to dedicate the song to a couple of friends. Just by doing this, they will get an invitation to an exclusive online concert. And, in addition, those ones getting more “Likes” on Facebook and Twitter as well as the most original on Instagram will get a CD of the artist signed and dedicated by him.

Take a look at the action clicking on the image below … and participate! You are still on time (the deadline ends this Friday, September 4th)!