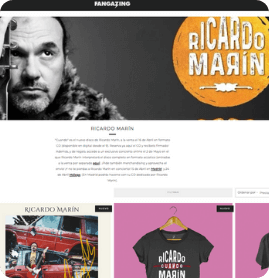 The artist, who counted on us for his first single launch through an action focused on his videoclip, has once again counted on los amigos digitales to launch the preorder of his new album.

The album, titled “Cuando” (translated “When”) will be on sale on April 16th in CD format (and available in digital from the 9th)

We have defined how the pre-sale works, and put in contact all the parties that have intervened in it (artist, the online sales platform, and the streaming events one), as well as ensured the project coherence.

His fans can preorder the CD and receive it signed. In addition, and as a bonus, they will have access to an exclusive online concert on May 2nd in which Ricardo Marín will perform the complete album in acoustic format (tickets on sale separately on the streaming events platform)

And not only that, but they will be able to get their official merchandising with the preorder: Five different t-shirt models have been created, in addition to personalized guitar picks.

Check out the preorder here.

los amigos digitales are also taking care of the digital campaigns on Facebook, Instagram and Google to announce the pre-sale, as well as the development of all materials (video for Facebook and Instagram, and banners for the Google display campaign). Here you can see the video:

Finally, in this campaign, Ricardo Marín’s tour dates presenting the album are also being announced: April 15th in Madrid and April 24th in Málaga.