We help Paralelo 40 with their “Natural Disaster” 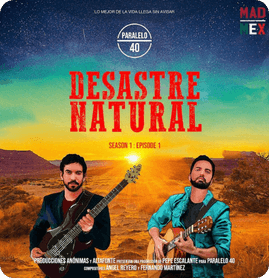 And it is that Ángel Reyero and Fernando Fu, the masterminds behind Paralelo 40, have relied on los amigos digitales to help them so that their “Natural Disaster” (their single originally titled “Desastre Natural”, that can be translated like that) reaches to more people.

“Desastre Natural” is the latest single released by Paralelo 40 to date, and we have been helping them with a series of digital advertising campaigns on Facebook, Instagram and YouTube so that it connects with more audiences.

Thus, we launched a promotion linked to its videoclip, and we announced it both on YouTube and on the Facebook platform.

The videoclip has doubled its views on YouTube in the two weeks of this promotion, also obtaining numerous more Likes and Comments.

A playlist was also launched on Spotify with the new single and a selection of the best Paralelo 40 songs. The playlist description also made reference to the previous promotion, in order to try to get the maximum participation in it.

This last campaign has had such good results that a new phase has just been launched announcing the playlist on Spotify, which you can listen to here. You can see the video here or by clicking on the image below: