We design the Pablo Lesuit campaign in Spotify 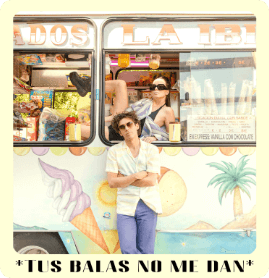 As we announced a few weeks ago, we advise digitally to Esmerarte.

Pablo Lesuit, one of the artists who work with them, released on June 25th his new single, “Tus balas no me dan” (translated “Your bullets don’t impact me”), together with the Peruvian artist Pamela Rodríguez (on tour in our country with Los Pilotos presenting their new album, “Alianza Atlántica” (translated Atlantic Alliance”)

Thus, we put our neurons to work to design possible actions that could support the single release.

Esmerarte’s colleagues picked up the gauntlet, using some of them… and specifically today we want to present this one, of which we are especially proud… Also because of the spectacular and elegant way with which they have brought it to life.

The initial idea was to launch a campaign on Spotify in which we’d ask users of this platform to include Pablo Lesuit’s song in their playlists, to try to get the maximum number of streams of the song with the playlist, and thus win a prize.

For this, users should register, so that we knew who were participating (and we had their contact information to get in touch with them in case of winning)

And Esmerarte, taking advantage of the fact that they are the organizers of the prestigious O Son Do Camiño festival in Santiago de Compostela, and that Pablo Lesuit is performing right today July 15th (together with the very popular Camilo), they have launched the campaign on the festival screens:

If you click on the photo you will see the video in which all the action is explained, and which is the one that is projected on the screens.

We have already participated! Our playlist is “Pablo Lesuit mola!” (translated “Pablo Lesuit is cool!”) But as we can’t win, please join the competition, and spread the word about Pablo Lesuit’s song (he deserves this, and much more), and hopefully get a pair of great AirPods! Click here to participate!