We design the digital strategy around Manu Tenorio’s new single 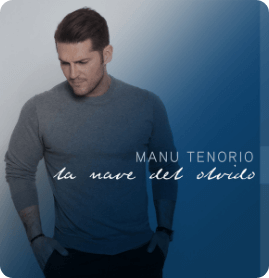 As we communicated a few weeks ago, we have been working together with Manu Tenorio and his team for some time already. This has given us the opportunity to design the digital strategy for his new single launch from scratch.

Manu Tenorio is releasing a new version of the popular song “La nave del olvido” (translated “The ship of oblivion”), with which he recalls the best melodic singers, but with a completely updated musicality and his unique style.

On May 15th we began to create expectation among his followers by uploading the playlist “¿Qué canción falta aquí? (Y que será mi nuevo single)” (translated “What song is missing here? (And what will be my new single)”) to his profile on Spotify.

This playlist was the basis of an action that the artist revealed that same day on Instagram, and in which he invited his followers to guess what his next song was.

The playlist includes many songs by the popular composer Dino Ramos, but not this song, which is precisely one of his most popular compositions.

Throughout the weekend Manu Tenorio was giving more clues on this social network, until many of his followers discovered that the song had to be “La nave del olvido”.

On Monday 17th Manu revealed the name of his new song, as well as the winner’s one (who got two CDs signed and dedicated by him)

The next day, we published a new playlist on his profile on Spotify with some of the best versions of this song, by other great artists (such as Los Panchos, Lola Flores, Julio Iglesias, Buika, Moncho, Chavela Vargas…). You can listen to this playlist here.

The objective of these actions has been to revitalize Manu Tenorio’s profile on Spotify, and lead his audience to the popular streaming platform.

Afterwards we activated the PreSave of the new single. His followers have the opportunity to get an official merchandising pack just pre-saving the song. This was announced from Manu Tenorio’s networks (supported by an advertising campaign to maximize the reach)

The piece of this campaign, which you can see here, advanced the first seconds of the song.

And finally this last Friday we announced the videoclip premiere on the artist’s channel on YouTube. In addition, and taking advantage of the fact that Manu Tenorio has a good subscriber base, we added a trailer to the premiere, revealing a larger fragment of the song (and with images from the video clip)

Manu also communicated this on his networks, with a shorter fragment of the video, to drive his followers to the YouTube channel, where, in addition, they can activate the premiere reminder.

All this leads to the premiere of his new song this Friday (May 28th) on all platforms, as well as the videoclip on his YouTube channel at 20:00 (Spanish peninsular time, GMT+2)

Finally, when the song is released, we will activate campaigns to the multiplatform link of the song, as well as to the video clip on YouTube.