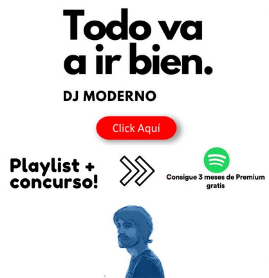 And this is it because Dj Moderno sings so in his fourth single since he promised to release one every month in October 2020.

At that time the artist decided to start producing material and publishing it under his own name: Dj Moderno.

Since then, and at the rate of a single per month, he has released the songs “Sigo Aquí Sentado”, “Virus Mutante”, “Ya No Eres Especial” and now this new “Todo va a ir bien”.

With his previous single (“Ya no eres especial”), we, at los amigos digitales, had the pleasure of collaborating with the artist, helping his video clip to exceed 6,000 views on YouTube and helping the song to be included in some of the best indie lists in TIDAL, Deezer or AppleMusic.

And now the restless producer has counted with us again to launch a campaign linking Spotify with his social networks.

Thus, the artist has created a video on YouTube in which he talks about the single’s playlist on his profile, which you can see here.

The playlist with this song on Spotify, along with other songs by the artist, and songs that he usually plays in his sessions, can be found here.

And on his Instagram profile he has launched an action linked to the Spotify playlist and the YouTube video so that his audience can get a chance to win a 3-month subscription to Spotify Premium.

This latter, along with the playlist, is advertised with an audio ad recorded by the artist himself on Spotify, thus increasing the number of listeners to his new song, previous songs, as well as Spotify and Instagram followers.

What are you waiting for to contact los amigos digitales and launch multiplatform actions like this one?