New phase of the FEFOC and Manolo García campaign 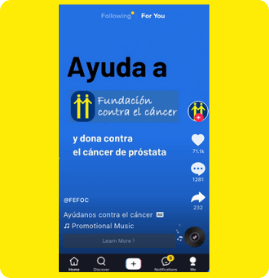 The donation campaign against prostate cancer of the Foundation against cancer (FEFOC) in which Manolo García collaborates, and in which los amigos digitales had the opportunity to help, performed so well that Manolo García’s team decided to count with us again to launch a second phase of the campaign.

In its good result, without any doubt, the protagonism of the artist played a very important role, as well as the material that he has made available to donors (3 of his paintings, 10 signed copies of his latest book and 25 lithographs to choose from among his drawings), along with all the support from his official website and mailing list, Sony Music’s social networks (his record company), and those of his fans (such as the Facebook page “Manolo García y compañía”)

As we already said then, we are really proud about one of the materials created by us for the advertising campaign (the Facebook video) being used in those other contexts.

In addition to all this, the campaign that we launched on Google and Facebook to reach the followers of Manolo García and FEFOC did help to amplify the message.

The results were undeniably good (both in terms of published impressions, audience reach and traffic to the donation website), and Manolo García’s team decided to count on los amigos digitales again to launch a new phase of the campaign.

On this occasion, in addition to using the Google display network and the FEFOC page on Facebook to reach a new audience that might be interested in this initiative (and which we didn’t reach in the first phase), we are using the TikTok possibilities, one of the most popular applications right now, and not only among younger people.

We have created there a video based on an animation with the same graphic line as the rest of the campaign with the help of their system, and with which we are obtaining very good results.

Here you can see how it is:

What are you waiting for to do like Manolo García and his team? Count on us to launch your digital campaigns with the best possible results, on all kind of platforms: Traditional ones such as Facebook and Google, but also more specific ones like Spotify, or new ones like TikTok. We want to be your “amigos digitales”!